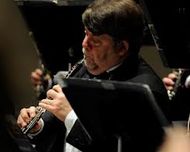 Internationally renowned woodwind artist and pedagogue Dr. Richard Kravchak is accepting a limited number of highly motivated oboe, bassoon, and classical saxophone students at any level into his private woodwind studio. Dr. Kravchak accepts students at all levels, from beginner to professionals preparing professional auditions. His only requirement for prospective students is that they have an outstanding work ethic and the ability to accept and respond to positive feedback regarding their playing.

In addition, he has been heard as an oboe soloist, chamber and orchestral musician worldwide, performing throughout Europe, Asia, and the Americas. He specializes in contemporary music, with over 100 compositions written for him, and HIP (Historically informed practice) frequently performing period music on oboes of the Renaissance, Baroque, Classical, Romantic, and early 20th century. His debut solo album, California Oboe, has received critical acclaim, and is available on iTunes. The title track on his album New York Moments was submitted for Grammy Consideration.

Dr. Kravchak's students have been highly successful holding positions in orchestras and universities across the United States. His precollege students hold principal positions in a number of Youth Orchestras and at the world renowned Los Angeles High School for the Arts (LACHSA).